Wylie’s moniker, Wide-Awake Wylie, is as descriptive of this dynamic community today as it was in the 1880s when the phrase was coined. Back then, the nickname was inspired by the visitors and commerce infused by the Gulf, Colorado and Santa Fe Railway, along whose right of way, Wylie was incorporated in 1887. Today, Wide-Awake Wylie evokes a nostalgic fondness for the hometown feel that residents still treasure, while embodying the liveliness and energy of a community that enjoys gathering for recreation and special events.

Since its spirited beginnings, Wylie has become one of the fastest-growing communities in the country. With a population of almost 50,000, Wylie’s growth reflects a 230-percent increase since 2000. Its quality of life and spirit of community are but two of the factors cited in Wylie’s ever-lengthening list of awards and accolades. MONEY Magazine named Wylie the 25th Best Place to Live in the Nation, and financial website NerdWallet named Wylie the No. 1 Best Small City for Families in the Nation. Security organization SafeWise named Wylie the ninth safest city in the state, and Realtor.com named Wylie the second hottest suburb in the U.S., just to name a few.

Things to Do in Wylie, Texas

Recreational opportunities abound in Wylie, including a park system featuring more than 700 acres of parkland and open space, over 10 miles of trails, 15 playgrounds, eight pavilions and many sports fields. The recreation center features state-of-the-art workout equipment and a climbing wall, and Lavon Lake and Lake Ray Hubbard provides even more places to gather and enjoy the outdoors.

The Wylie Municipal Complex features a 44,000-square-foot library, a 47,000-square-foot recreation center, and a 46,000-square-foot city hall and incorporates green building and energy-saving initiatives. The complex is located on a small piece of the rapidly vanishing Backland Prairie; Wylie is partnering with Texas Master Naturalists to restore 22 acres of this treasured prairie, ensuring an unspoiled landscape for its citizens and a link with the area’s geographical history.

Wylie is also becoming known for its public art installations, created by nationally known artists. Eleven pieces will be in place by the end of 2017.

In 2016, Collin College announced plans to build its newest campus in Wylie. Ground will be broken within three years, with the 415,000-square-foot campus, which will accommodate 7,500 students, slated to open in 2020. Wylie ISD is a rapidly growing school system covering 41 square miles and featuring top schools. Wylie ISD has 20 campuses, including one 6A high school and one 5A high school, one alternative high school, three junior high schools, three intermediate schools and 11 elementary campuses.

Wylie embraces growth and prosperity without sacrificing its hometown appeal. Its many community-driven events include the Wylie 500 Pedal Car Races, Bluegrass on Ballard, Boo on Ballard and Night of Wonder Magic Festival, National Night Out, the Wylie Arts Festival, Christmas parade and tree lighting.

Wylie is Overall the Perfect Place to Live

Welcome to Wylie! Its unique sense of home, selection of housing, growing retail options, historic downtown area and recreational opportunities make Wylie the perfect place for family or business. With an eye to preserving the past, a celebration of present-day good times, and planning for the future, Wylie is still wide-awake! 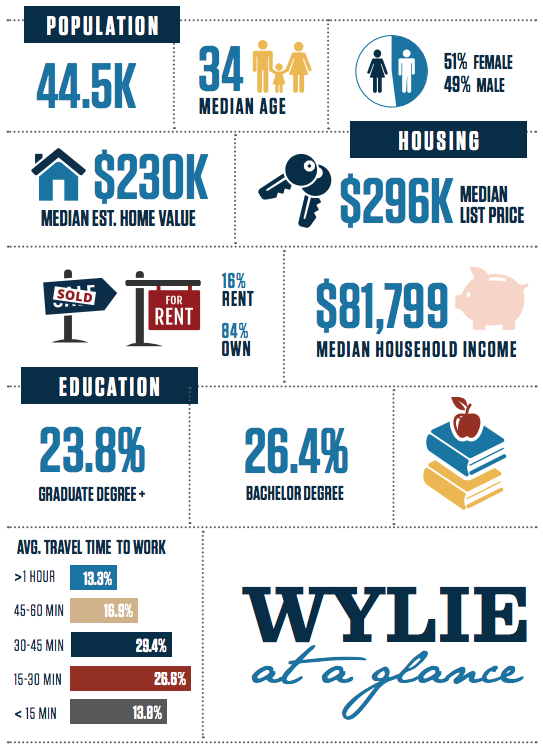